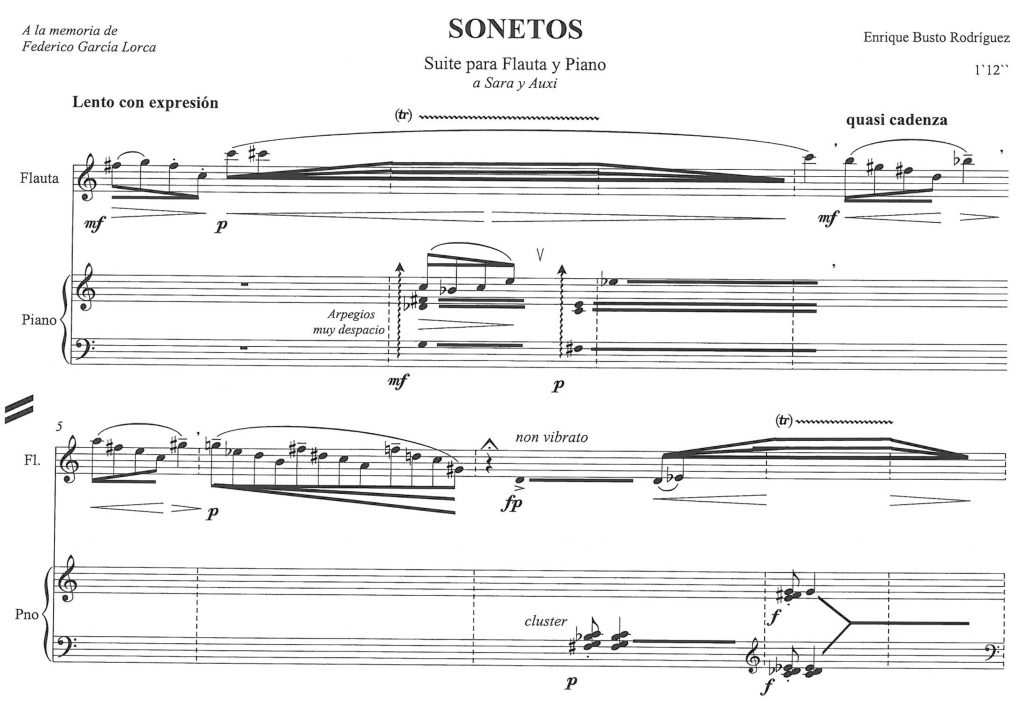 Premiere: May 23, 2003. “Manuel Castillo” Superior Conservatory of Music in Seville.

“Sonetos” for flute and piano, is a piece divided into four movements and inspired by four sonnets by Federico García Lorca, a poet to whose memory it is dedicated.

It arises as a result of the final studies of composition at the Superior Conservatory of Music “Manuel Castillo” in Seville under the tutelage of Ignacio Marín.

In its elaboration, the composer was very influenced by the precepts that Oliver Messiaen collects in his treatise “My musical language”, as we can highlight in the use of modes with limited transpositions, non-retrogradeable rhythms, melodic contours inspired by the songs of the birds, ….

Each movement aims to show us different perspectives on the instruments involved. The last being, as a compilation of its predecessors, a cyclical movement to close the work.

As an interpretive suggestion, the author proposes that during the concert, each movement be introduced by reading its corresponding poem.

We find an introduction “ad libitum” in which the measure is annotated with a special spelling that offers a certain freedom to the performers, to then move on to the movement itself, which is characterized by its rhythmic richness and energy, playing with the combination of different measures and accents, such as 3/8, 6/8 and 3/4 (not written but understood), very popular in the dances of southern Spain. 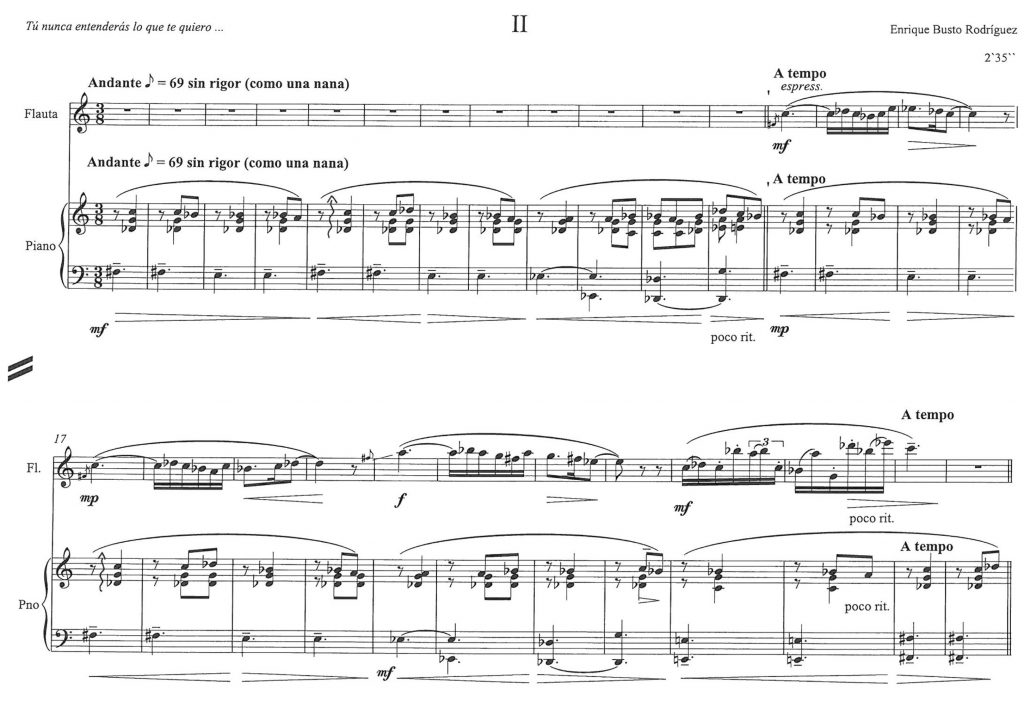 It is the most melodic and expressive movement of the four. It is a lullaby, in which the two instruments carry out a continuous dialogue. First, the piano takes the accompaniment roll to finally take the lead voice with the contrapuntal accompaniment of the flute.

There is a version for Cello and Piano of this movement. 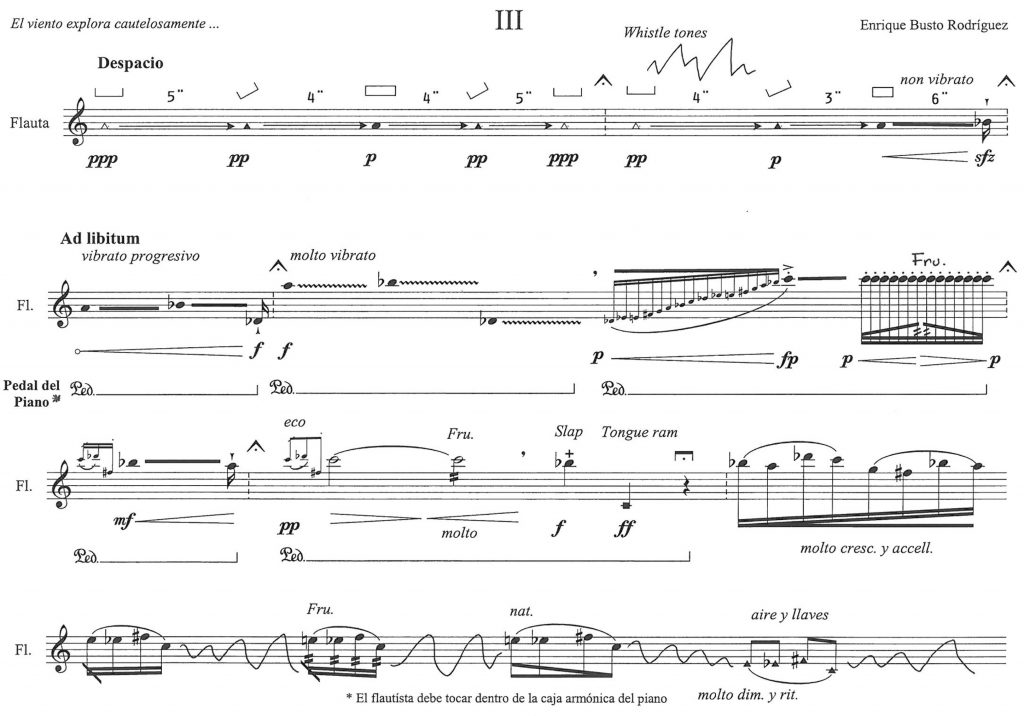 This movement is the most experimental of the four, in which the composer uses new extended techniques and new spellings to represent all of his inner imagination. It is divided into two sections: the first is an introduction to the flute solo in which the game with the air, slap, noise of keys and other resources, make this introduction a game of different atmospheres that will give way to the next section which consists of an ostinato that will lead to the climax of the piece. 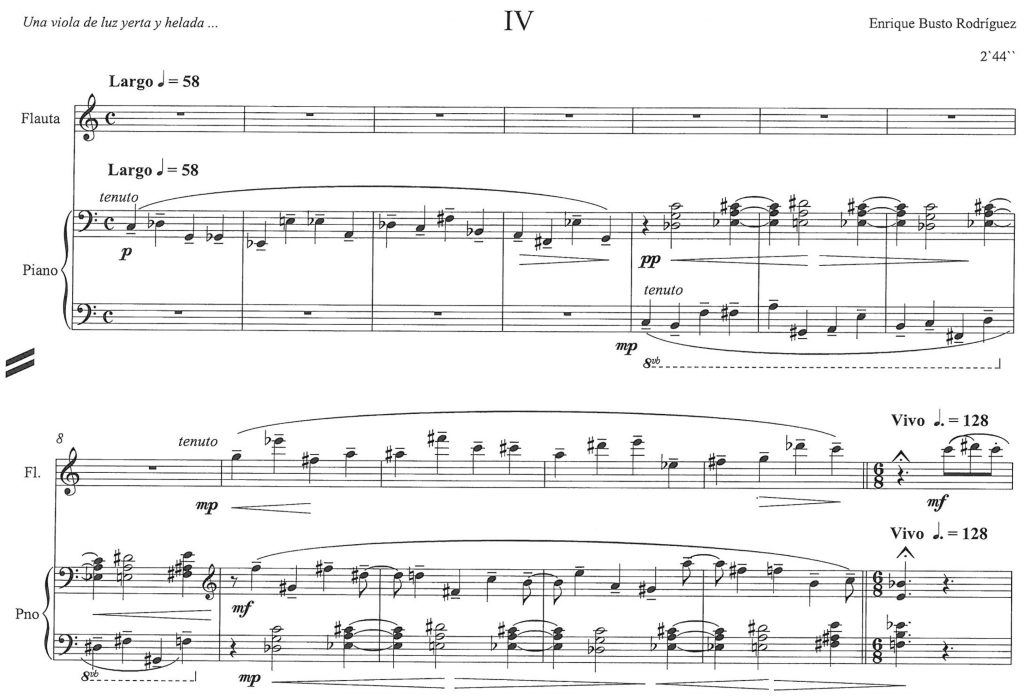 In this fourth movement, structured in the shape of a rondo, themes from the previous movements appear, as a cyclical movement, which serves to give unity and close the work.