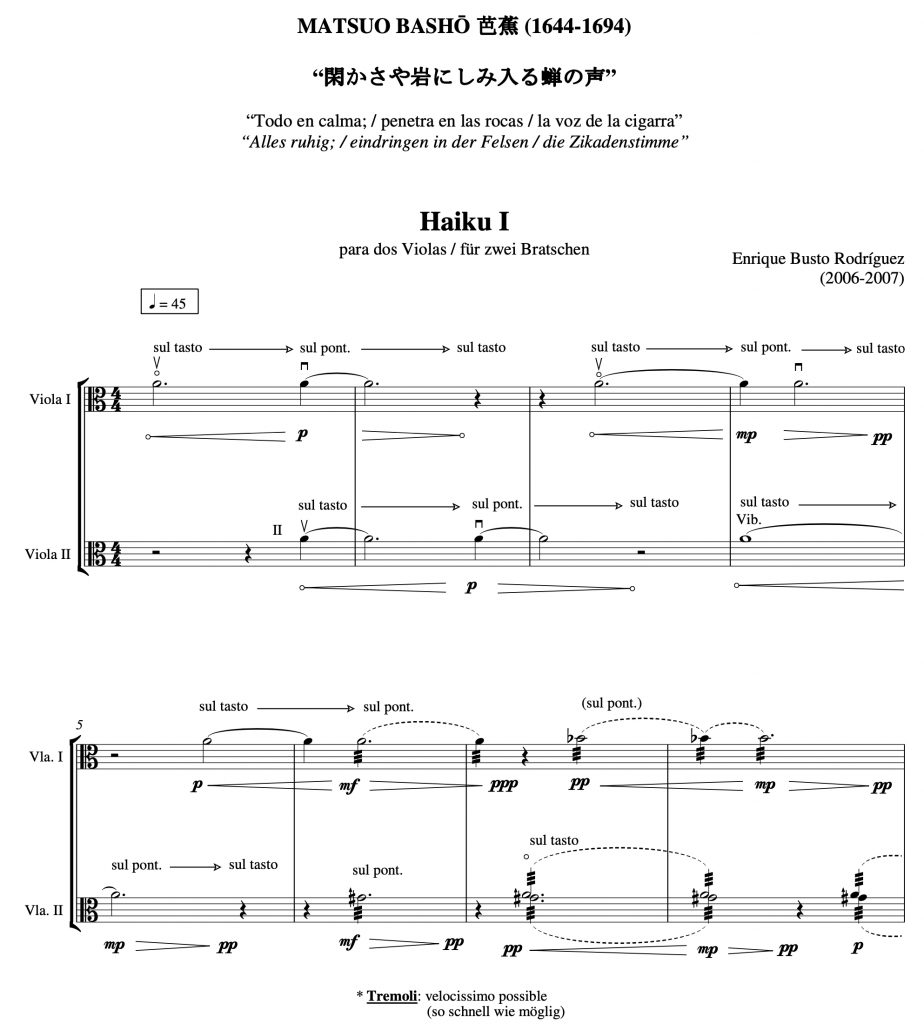 We find four small pieces for two violas written during composition studies at the Robert Schumann Hochschule in the German city of Düsseldorf, with the composer José María Sánchez Verdú.

Each piece is inspired by a haiku of the most important Japanese poets. The Haiku is a very short poem, it has only three phrases that contain a strong expressive charge. Under this premise, the initial approach was to create pieces of short duration, with few materials and with a great expressive load, as a memory after the contemplative reading of each haiku.

It is inspired by a haiku by Matsuo Bashö (1666-1694), one of the most important poets of the Edo period of Japan. Bashö cultivated and consolidated haiku with a simple style and with a spiritual component. His poetry achieved international renown and in Japan many of his poems are reproduced in traditional monuments and places.

In this piece we highlight the subtle play of timbre produced by the changes of position of the bows between the two instruments, as well as the use of very fast and harmonic tremolos. 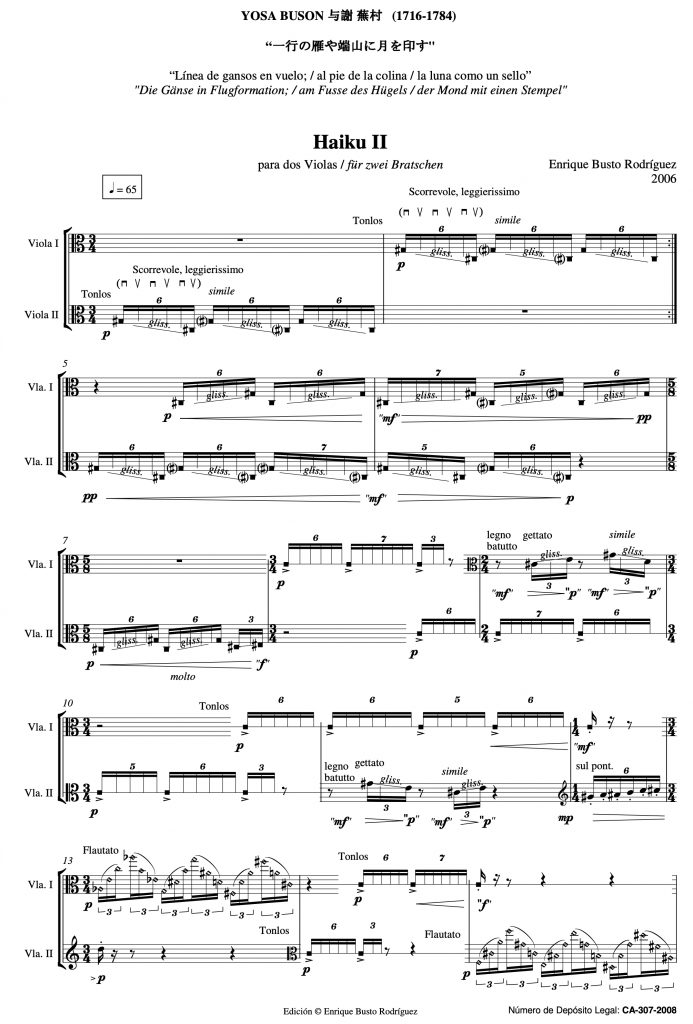 Inspired by a haiku by Yosa Buson (1716-1784), born near Osaka (Japan), he was one of the great masters of Haiku in the 18th century and a distinguished Japanese bunjinga painter.

In this piece we highlight the use of covered strings, like mute, which represent more noise than a certain height. It also highlights the continuous movement of sixteenth notes that give a great liveliness to the piece, as a perpetual movement. 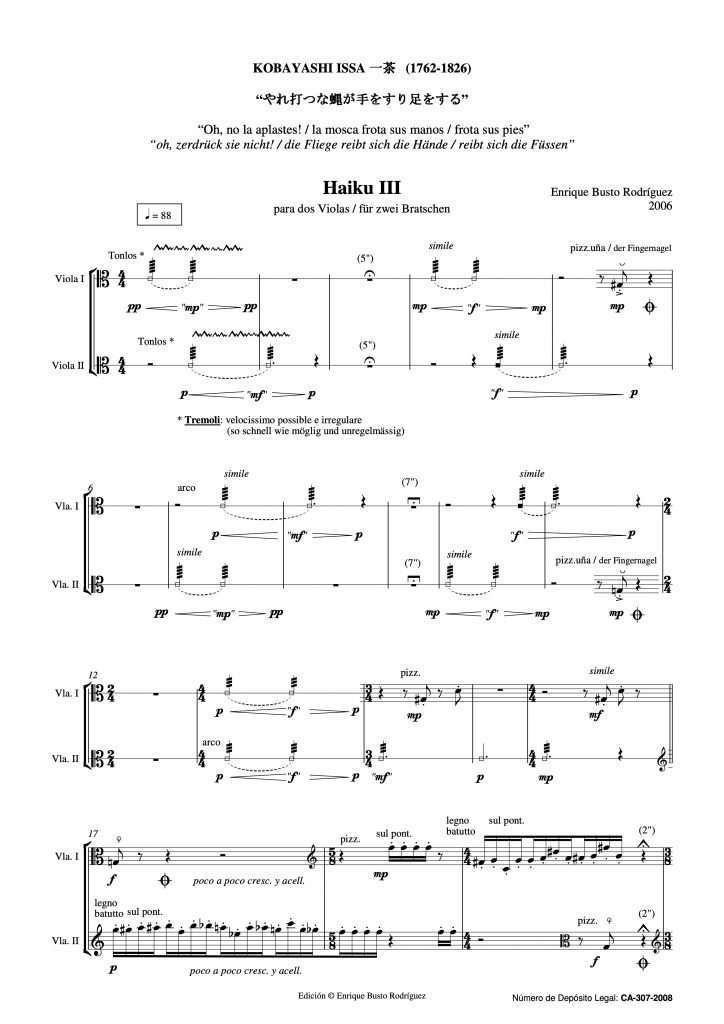 This piece is inspired by a haiku by Kobayashi Issa (1762-1826), a famous Japanese poet from a very humble family and a life with many calamities.

This piece plays with the timbral contrasts by the noise (tonlos) with an irregular and nervous tremolo, with other fragments with defined heights and with legno batutto. 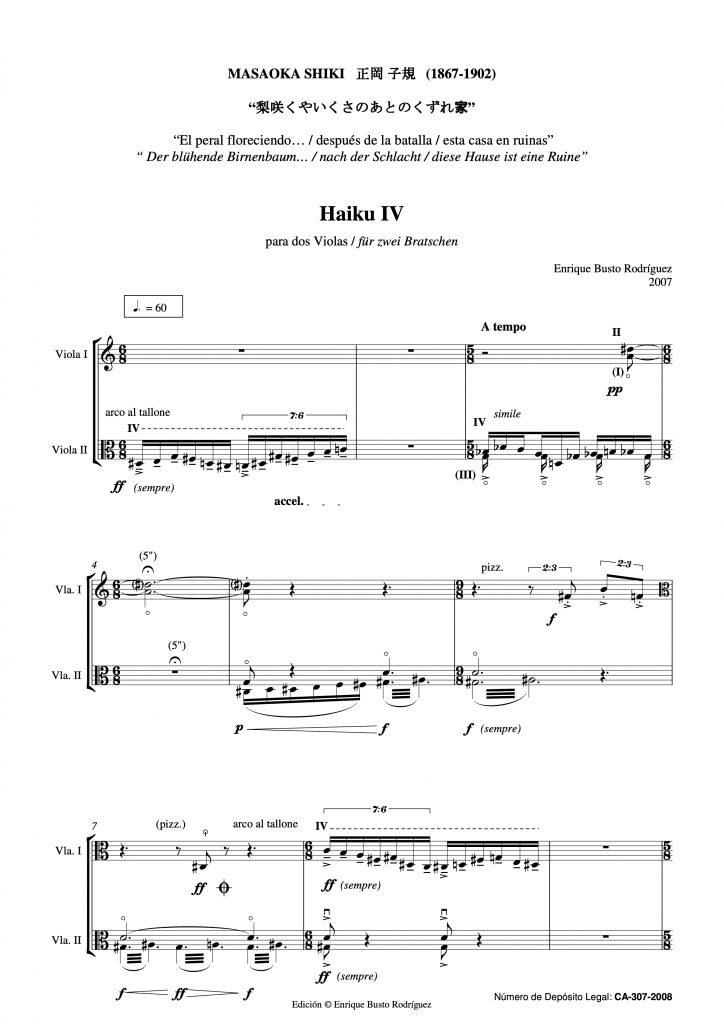 The last piece is inspired by a haiku by Masaoka Shiki (1867-1902), a Japanese poet, literary critic, and journalist from the Meiji period. His real name was Masaoka Tsunenori. Shiki was a renovator of haiku poetry, of which he is considered one of the four masters along with Matsuo Bashō, Yosa Buson and Kobayashi Issa, treated in the previous pieces.

In this piece we highlight the use of double strings, glissandos, pizz. and other timbral resources creating great contrasts, as in haiku.